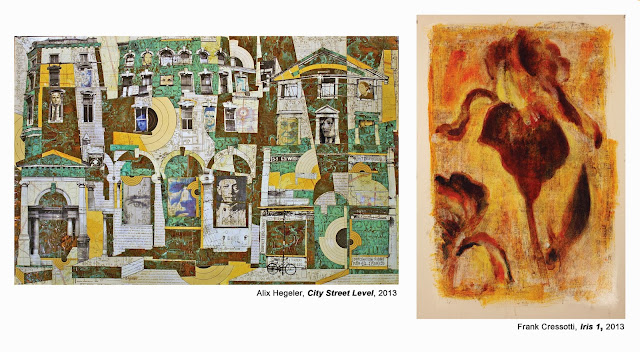 I would prefer to say as little as possible about this group of pieces to let the viewer approach without preconceptions. But it is traditional to give a few hints from the studio and this is only fair.

Several ongoing series are represented in this exhibit and although all are related with overlapping themes and processes, each series required its own form.

I have included all the books I have made in the last 15 years that remain in my possession. Locations and people are the primary points of departure.  There are people who interest me, visually and otherwise. Writers, friends, colleagues, notorious characters and historical figures have been considered. Familiar streets and cities are sources for many books in this group.

The Surveillance Panels began as a response to the ever-watchful eyes of surveillance cameras in the United Kingdom.

The other panels were assembled from all kinds of interests. The process of drawing and painting can be a part of the collage along with found materials, tabloid headlines, Polaroid lifts and paper army men. This series has been a way to manage the constant assault from news items and the activities of our fellow citizens. I'm rather fond of the London tabloids and they have suggested several projects.

The City Street views are more difficult to describe. Perhaps I am working with architecture as Dr Frankenstein worked with the human body; assembling, disassembling and reconstructing from assorted components. Both pieces are from Commercial Street in the East End of London.
.....

Alix Hegeler was born in Danville Illinois in 1957 and has lived in the Pioneer Valley since 1978. She received her BA in Drawing from Hampshire College and MFA in Printmaking from the University Of Massachusetts/Amherst. Hegeler has been teaching Printmaking and Design at Holyoke Community College since 1986 and enjoys time in S. Illinois and London when school is not in session.

I have always been attracted to pictures. I grew up drawing from comic books, sports and news
magazines, art books, and more. When I attended Gettysburg College I studied painting with a strict
formalist named Ingolf Qualley who was adamant in expecting that a formal and structural language is
essential to making visual art. Structure was to be discovered in every source for every painting and
drawing, whether observing objects in nature or looking at a photograph. Once discovered it was
essential to the development of the artwork being produced.

The idea of visual structure involved an exploration of form and space, light and shade, color, or
texture as they might be found in the source the artist worked from. Similar structural expectations
applied to the medium itself, the surfaces worked upon, and the processes through which the medium
was applied. A picture could never simply be a picture. A resolved painting or drawing had to express
this search. Paul Cezanne, and many of the Post-Impressionists, Henri Matisse, and Pablo Picasso stood
as key examples of this point of view. Later I discovered other figures whose work was valuable to my
own approach: Georgia O'Keefe, Charles Burchfield, Arthur Dove, to name a few.

After grad school I worked with Dada and Pop, color field, and geometric abstraction. These helped me
to understand the page upon which I worked, to develop a palette, and exercise my capacity for markmaking.
They also helped me to respect the value of chance as a means of proceeding productively in
the art process.

Nevertheless, all this led me back to the formal direction established at Gettysburg College, and an
earlier impulse to look at and make pictures
......

Frank Cressotti is a lifelong resident of the Pioneer Valley. He grew up in Westfield where he attended
public schools. He has lived in Southampton since 1971. He received his BA with a major in art from
Gettysburg College, and his MFA with a major in painting from Ohio University. He has taught art at
Holyoke Community College since 1969.