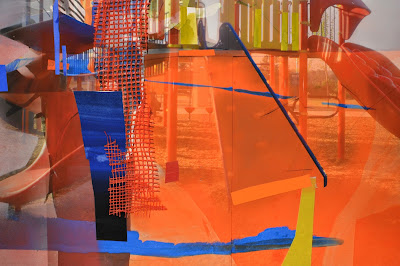 Since they first met in graduate school over ten years ago, artists Sandy Litchfield and Jen Simms have been in conversation about their artistic visions, processes and goals. Throughout the years, there has been significant overlap in their work, which includes similar media, forms and ideas. Both artists are interested in the tension and/or balance between the abstract and the representational, both trust the caprice in their search for new forms, and both take inspiration from the intersection of the domestic and the wild.

In 2012, the two artists began a visual dialogue through the mail. This interchange of ideas concluded with a series of artist books meant to explore an alternative to written language. Like a verbal conversation, each piece began with a proposition; there was a point and then a counter-point with moments of revelation as well as moments of clarification and repair. This became a negotiation between two visions and what the artists refer to as ‘collaborative play’.

This year, the artists engaged in a week-long retreat in the Adirondack National Forest where they began a series of collages on paper. When they returned to their studios, they continued to revise and reinterpret this work.  In addition, both artists began using more sculptural materials. Their vocabulary evolved to included forms that reference not only the home and wilderness but also the playground as an intermediate space for shared expression- a place that is both fun and sometimes rough, but almost always imaginative and reciprocal.