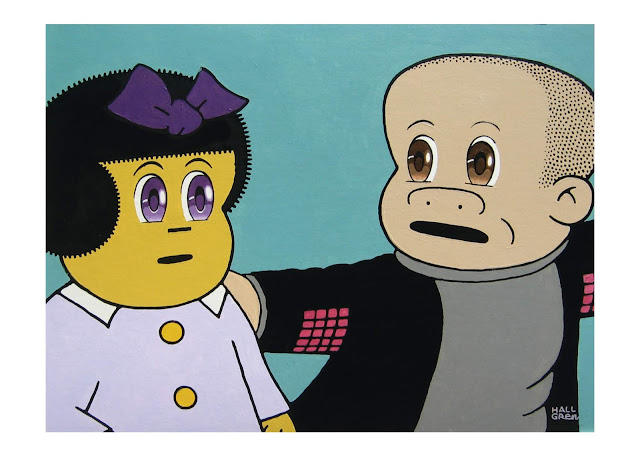 The Taber Gallery is pleased to present a retrospective look at the work of artist and illustrator Gary Hallgren. Rooted in pop culture, Hallgren's approach to the comic art genre is unique from other artists who have ventured in this realm. As Hallgren states, "Pop art can be about more than art or culture, it can be about that most universal of themes: the Human Condition.  Familiar newspaper comics characters can carry much symbolism on their black-and-white backs after being infused with the gravitas of easel painting." In addition, Hallgren's visual pleasures of bold designs, distorted realities, finished and unfinished surfaces, canonized humor and the joy of painting are clearly present in this exhibition's selections form his expansive body of work.

Gary took his B.A. in painting and design from Western Washington State College in 1968.  In 1971, he joined a band of radical cartoonists in San Francisco and took on the mighty Walt Disney organization by contributing to this group’s self-published comix books, Air Pirates Funnies.  These savage parodies, which used Disney’s own characters, were found to be in violation of federal copyright law.  The legal wrangling went on for a decade and people like Paul Krassner (The Realist) and noted critic Nat Hentoff were in support of the Air Pirates, but alas, Gary now has a permanent injunction against using Disney characters in unauthorized ways.  However, he considers all others to be fair game.

Magazines and other print outlets have provided a livelihood for Gary for 45 years.  His freelance illustrations have appeared in Time, The New York Times, and The Wall Street Journal.  Balancing these august publications are Mad, Marvel Comics, Screw, and a hundred in between. Since 2003 book illustration has been a mainstay, and You: An Owners' Manual by Doctors Mehmet Oz and Michael Roizen was published in early 2005.  It sold over a million copies in hard cover. Most recently, Gary supplied the finished drawings for Hagar The Horrible.